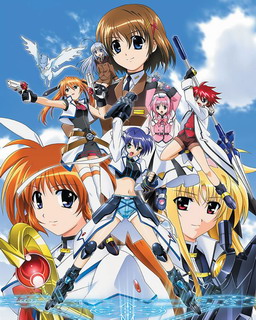 Set 10 years after Mahou Shoujo Lyrical Nanoha A`s, Nanoha, Fate, Hayate and the rest of the crew are now working full time in the Time-Space Administration Bureau. Nanoha is a combat instructor, Fate is a special Investigator, and Hayate is a commanding officer. They must unite once again to save the dimensions. Introducing new characters as well: Subaru, Tiana, Carol and Elio. Stand by. Ready. Set up.!
by Kiety

"I liked the main character, Subaru, but unfortunately nothing else held my interest. I guess I just don't like 'girls with guns' as much as 'women with guns'. Nobody looked or sounded like an adult."

The third series in the Nanoha franchise, and the first I’ve seen. Actually, this is probably my favorite show of the season of the batch I’ve seen. I’m a sucker for superhero stories, and that’s what this one is. On another world where “mages” form a role somewhere between police and military, an elite squad of female mages takes on a number of new recruits for their next generation. This is a good old fashioned tale of superhero cadets earning their stripes, and a solidly well done one. The drama parts are a little typical and sometimes forced, but the action sequences and everything else is top knotch.

No infringement is intended and this article is purely for informational purposes.
The images of the series are for indicative purposes only.